Melissa has several years of experience as a pediatric Occupational Therapist and is currently licensed and certified in the states of North Carolina and Virginia. She received a Bachelor’s degree in Chemistry from Virginia Tech in 2006, but after providing respite services to a young girl with autism, she was inspired to change career paths. She received her Master’s of Science in Occupational Therapy from Virginia Commonwealth University in 2012. Melissa recently moved to North Carolina to be closer to family and her home state of South Carolina. She enjoys hiking, yoga, rock climbing, and being outdoors.

During her career as an occupational therapist, Melissa has worked in several outpatient pediatric clinics as well as provided home-based Early Intervention services through the Infant and Toddler Connection of Virginia. She has received training in programs such as Handwriting Without Tears, The ZONES of Regulation, Therapeutic Listening, Integrated Listening Systems (iLs), and reflex integration. She holds a current certification in Adult and Pediatric First Aid/CPR/AED.

Melissa has worked with children of all ages and of various diagnoses, including Autism Spectrum Disorder, Down syndrome, Attention Deficit Hyperactivity Disorder, premature birth, developmental delays, and fine motor delays. She understands the importance of family-centered care and enjoys pursuing goals that are meaningful to both the individual client as well as their caregivers. As a clinician, she is excited to see children in their natural environment, utilizing creativity and a play-based approach to assist them in achieving their goals during everyday situations. 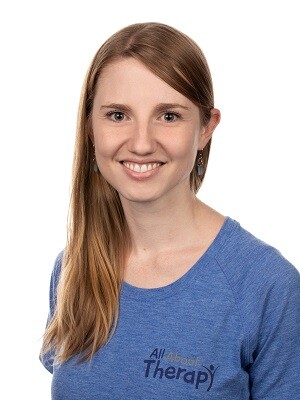