How Much Drooling is Normal?

How Much Drooling is Normal?

Believe it or not, infants produce very little saliva during the first three months of their lives. This may be because infants at this age are being fed formula or breast milk which does not require a lot of saliva to manage. Because of this their body produces the minimum amount of saliva needed. A little saliva is needed help keep the mouth moist. When an infant who is zero to three months old is laying on their back, it is unlikely that they will drool. However, when they are required to keep their head up in supported sitting (a new motor skill), they may drool a little. 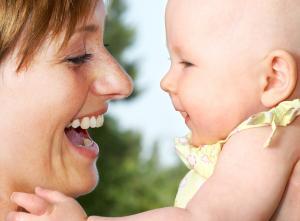 By six months most infants are learning to sit up on their own and will not drool in this position. Most are also comfortable in tummy time and do not drool in this position either. Drooling may be seen during the new tasks of reaching for and manipulating objects, especially if they are really concentrating! Around six months an infant may get their first tastes of baby food, which requires more saliva to manage. Babies at this age may salivate before, during, or after eating pureed baby foods. You may also see a six month old drool as they learn to babble! At six months of age teething may start, which will cause drooling. Babies usually first get the bottom two incisor teeth on the bottom gum, and then the top two incisor teeth on the top gum.

Nine month old babies can roll from side to side, sit unsupported, and “army” crawl with no drooling unless they are teething. They may drool when eating but they don’t drool as much as six-month-old babies before or after their meal. 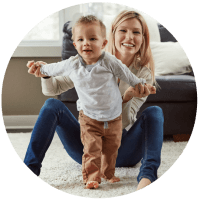 By the time toddlers reach twenty four months they no longer drool with advanced fine motor tasks or when speaking. If they are still teething, they may still drool when new teeth are coming in. At this age they have fully developed the ability to move their body in advanced ways all while keeping all of their saliva in their mouth!